This month heralded the launch of Badwater Canyon and a ton of new features.  While many of you are still getting acquainted with all the new features and the intricacies of the Pinemill Reservoir region of the map, some of you are asking what the future holds for Just Survive.

Now that Badwater Canyon is live, we have a foundation for much more frequent updates.  Below are just some of the features we plan on bringing to Just Survive before the end of the year.  While I’ve broken these out into a rough timeline, individual features may move forward or backwards on this list – our goal is more frequent updates, and while we will minimize the number of updates that require server wipes, we see no need to hold back individual features to a specific date or patch wave.

These features will be coming to the game as quickly as possible and should appear over the next few weeks.

You’ve been asking for more PVE Servers and we’ve been listening.  At the time of this writing, this effort is underway and we expect to have additional PVE servers up within the next two weeks.  These will go straight to Live and will not require a wipe.  No existing servers will be affected in any way so you’re in no danger of losing any progress, but you will see an additional 60 PVE servers per major region (Asia/NA/EU) appear in the server browser, for a total of 180 new PVE servers.

We’ve previously posted some work-in-progress towards the Metal Stronghold components, but in case you missed it, here it is:

These will be hitting Test in the next few weeks and will make it to Live soon after.  Metal Stronghold Components are the second of three tiers of Stronghold components are much stronger than the faster, flimsier Wood Components.  You might get some wooden defenses up quickly, but you’ll want to fortify your base with these stronger components, especially on your lower floors and around your critical rooms like your loot room, garage, etc.  Being impervious to melee weapons, these also make ideal outer fortifications to prevent casual or exploratory raids.

While these features are underway, they will take longer than the features listed above to make it into the game, so you’ll see these rolling out after the new Stronghold updates.

Long-requested Clan support is finally coming to Just Survive, and will play an important role in several other features.  While the first Clan Support update will cover the basics of invites, permissions, and ranks, it will also include a Clan bank that members can deposit or withdraw Golden Eagle Coins into, to pool resources for Stronghold purchases as well as protect their funds from loss on death.

With this update, players and their Clans will accumulate or lose reputation based on their actions in the game.  To maintain a Stronghold location, you’ll need to maintain your reputation.  Successful raids will increase your reputation, but losing a raid as a defender will cost you reputation. If a player or clan loses too much reputation, they’ll lose the backing of the local military and will forfeit ownership of their location. Shield functionality will now be tied to reputation loss, and shield duration will scale on successive attacks, ensuring that location forfeits will require consistent, concerted effort.

The Supply Cache is the primary goal for Stronghold attackers, and the destruction of this object will directly result in a Win/Loss Condition. If defenders are successful in preventing Cache destruction they’ll maintain their Reputation, thereby solidifying their grip on the Stronghold. But if the Cache is breached before time expires, that Reputation is lost and the Stronghold’s owners will be one step closer to homelessness.   Those simply looking for loot will still have that opportunity, and everything they can carry will be available during the Attack / Defense Cycle.

Barricading a cabin is a halfway point to a Stronghold for some players, but currently securing the door is a double-edged sword.  This feature will allow you to add a (destructible) lock to a door to fortify it against intruders, allowing you to secure a cabin, home, or other small building from other players.

The Return of Handcuffs

A fan favorite, especially among role-players, we’ve re-examined the handcuff system and will be reintroducing it to Badwater Canyon.  If you have handcuffs in your possession, when a player yields to you in-game, you can handcuff them and loot them before letting them go.  It’s also a great way to safely transport initiates to your Stronghold, preventing them from causing any trouble while in route.

Some of these features, like the New Map Regions, are in the middle of their development cycle, but some are just beginning.  As such, expect these features to appear later than the second wave.

Resolution Ridge, located in the Northwest quarter of the map, exists in the long-dormant caldera of a Volcano.  Key points of interest include horse stables, a Ranger station, lodging for travelers, a helicopter crash site, and a second military base.

Soda Rock Springs, located in the Southwest quarter of the map, is most notable for its city and residential areas.  Both this region and Resolution Ridge are currently in development, and you will see portions of them appearing off in the distance before the out of bounds area is increased and you’re able to explore them fully.

Advanced Vendor System
Corporal Moran’s inventory will be opened up for players with enough coins to spend, with higher tier gear available beyond the basic tools and equipment he currently provides.  Buy a gun to protect yourself on an excursion deep in enemy territory, or re-equip yourself after dying mid-raid against an enemy (perhaps catching a ride via helo or picking up your friends in a Humvee) for the right price.

The body simulation that currently manages your health, hydration, hunger, stamina, and comfort will be completely re-built to better communicate the value of those functions as well as add greater meaning to each individual portion of the sim.  As the body simulation is critical to establishing the urgency of survival, we expect this to have a huge impact on how players value food, water, shelter, and even clothing in the game.

The first of our upgraded zombies, the Armored Zombie is a fearsome foe, having succumbed to zombification while wearing crowd control gear.  Body armor and a helmet mean this zombie won’t go down quickly in a fight. 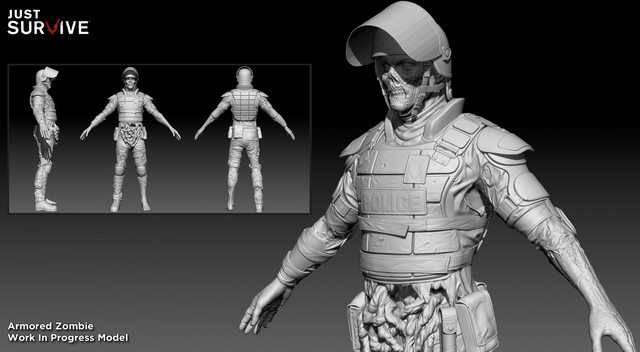 Behavior and Pathing for Zombies & Wildlife

We’re looking at a number of behavior and pathing improvements that will make wildlife more challenging to hunt and zombies more fearsome in close quarters, seeking to increase their ability to navigate difficult terrain, interior spaces, and crowds.  Threat assessment and targeting will also be addressed.  The goal is to make zombies better able to pursue players through difficult to navigate areas and increase the tension of entering those areas that have already been overrun.

Location based Zombie and Loot Spawning

Some locations should pose more risk than others.  A diner packed full of zombies feasting on the remains of former patrons should be more imposing than an empty field.  Rewards should be similarly scaled to such threats, ensuring that if you’re fighting through crowds of zombies to reach the diner refrigerator, you’ll discover more than just a lonely box of sugar.

As survivors become better attuned to staying alive in Badwater Canyon, zombies become less of a threat and more of a force of nature, like wind or rain.  But sometimes you face a fierce storm that forces you to take cover or risk being swept away, and so we will be introducing migrating zombie hordes that roam the map and take over sections of Badwater Canyon, forcing players to find cover, run away, or face the full fury of the zombie apocalypse.

These are just the highlights, but a number of smaller features, bug fixes, and gameplay balance adjustments will be included in every update we publish.

The Just Survive Team is excited to be working on all of these amazing features and we will be pushing these features to Live as they are completed.  Now that we’ve released Badwater Canyon you can expect frequent updates to Just Survive, starting with Metal Stronghold Components in September.

Thank you, Survivors!  We’re grateful for the feedback you’ve been providing and your continued support.